Danube Delta has been formed starting from the Upper Pleistocene and has evolute in connection with the three Danubian arms: Sfantu Gheorghe (the oldest, from the South, 126 km), Sulina (80 km) and Chilia (the newest, from the North, 116 km).
Named Istratos by the Greeks and Danubius by the Romans, the river carries every year between 75 and 85 million of tons of alluvia by means of its water volume of approximately 6,000 mc/s, thus increasing the surface of the Delta. In the area of Chilia branch, the territory advances into the sea by 40 - 80 m/year. 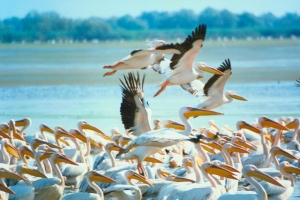 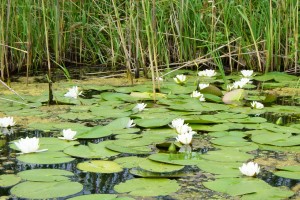 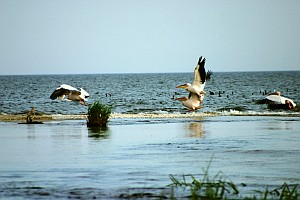 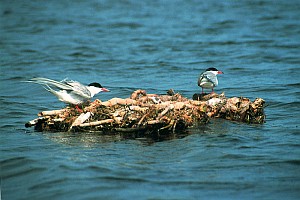 As a young region in full process of consolidation, the Danube Delta represents a very favorable place for the development of a flora and fauna unique in Europe with numerous rare species.
The aquatic medium is prevalent, so that the flora and fauna will be aquatic.
Between the aquatic and terrestrial mediums, the swampy, easily flooded medium is interposing, which has a special flora and fauna, with alternative possibilities of adaptation (water, land) depending on the seasonal and yearly hydrological regime.

There are many ecosystem to be found, each one with its characteristics:

The Danube Delta, included in the UNESCO Program as a Reservation of the Biosphere:

Tulcea - the capital of the district, ancient Roman settlement of Aegissus (VIII Century BC). Important port town, industrial center and the main access gate towards the tourist paradise of the Delta. To visit: The Danube Delta Museum, Saint Nicholas Cathedral, Azizia Mosque.

Murighiol - village situated 40 km South-East of Tulcea, on the Sf. Gheorghe arm, has a camping ground and a motel.

Sulina - Jean Bart's Europolis, documentary attested from 950, became porto-franco in 1900. There is a beach huge in lenght, with very fine sand.

Sfantu Gheorghe - a community of fishermen specialized in fishing sturgeon, which lives only in the Black Sea and the Caspian Sea. Lighthouse of 57 m high.

Bestepe - hills with the traces of a Getic fortress (IV Century BC).

Gura Portitei - is the place where the waters of Razim Center meet the sea and where you can watch a sunrise you never forget.