Throughout the 14th and 15th centuries Wallachia and Moldavia offered strong resistance to Ottoman Empire expansion towards Europe.

During this struggle the prince of Wallachia, Vlad Tepes (known as the Impaler, because he rarely ate a meal without a Turk writheing on a stake in front of him), became a hero; he later became associated with Dracula (Lonely Planet) and made famous by Bram Stoker's Book - an Englishman that had never visited Transylvania. 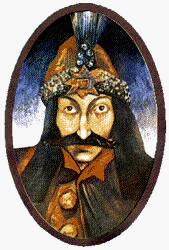 (Vlad the Impaler - Journal of the Dark)

But his favorite method was impalement on stakes, hence the surname "Tepes" which means "The Impaler" in the Romanian language. Even the Turks referred to him as "Kaziglu Bey," meaning "The Impaler Prince." It is this technique he used in 1457, 1459 and 1460 against Transylvanian merchants who had ignored his trade laws.

The raids he led against the German Saxons of Transylvania were also acts of proto-nationalism in order to protect and favour the Wallachian commerce activities.

We will be always happy to assist you with your travel plans all over Romania and any travel information about Dracula tours.