Book a hotel in Herculane

Baile Herculane (Herculane Bath) is situated on Cernei Valley, in the South-West part of the country, at 19 km from Orsova and 41 km from Drobeta Turnu Severin. This is the oldest spa from Romania and is well-known for its thermal baths.
The spa was visited by great personalities: Francis emperor and Charlotte empress, Francis Joseph emperor and Elisabeth empress. In 1852, Austria's emperor considered Baile-herculane as the most beautiful spa from the continent and Elisabeth (Sissy) empress' intimate diary is presenteding Baile Herculane as a marvellous and distinct place. 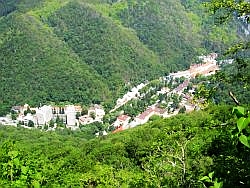 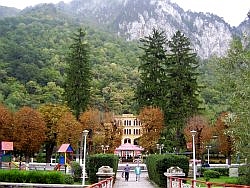 Since the Roman times, in the surroundings of thermal waters springs, were built settlements for Roman aristocracy's relax. Impressed by the recovery effects and miraculous efficacy of the thermal springs, the Romans together with the natives had developed the area transforming in a real oasis.
The first description about these places made since 153. year, when Ulpius Secundinus, Marius Valens, Pomponius Haemus had been sent as Roman delegates to assist the election of their excolleague Severianus, as consul quality, and turning back unharmed had lifted a commemoration's edifice as their gratitude. Since romans' time remained numerous constructions: baths, statues, water's main, coins, signs as gratitude for the Gods for recovery.

The spa's weather is specific for mountain's depressions, Baile Herculane being on the same parallel with Nisa and Venezia.

THE SPRINGS have a high radioemanation level, similar to the ones of Vichy and Montdore.
At present, 16 natural springs with thermal mineral water, scattered along the Cerna Valley for about 4 km, are known in the neighbourhoud of the resort.
In the late decades 9 hidro-geological drillings have been performed in order to obtain important flow increase.
The present-day thermal-mineral water supply the resort as in store is of 4.000 m3/24 h, that offers - due to their physical-chemical properties - various possibilities for the balneary treatment.
The clorine and sodium wich are found in great quantities(from 7mg/l to 4700mg/l), generally appear in thermal waters trough the effusion of hot mineralised vapors from the magma pits, trough the action of hydrochloric acid on the minerals in the rocks, the vapors go out to the surface of the earth.

THE NATURAL AIR - IONIZATION (2.000-2.500 negative air-ions/cm3/s) increases the resistance of the body to catching disease. Air-ions act on the organism by entering the lungs together with the in-coming air as well as by direct action on the skin.

Contur Travel, Romanian Tour Operator based in Constanta providing travel services in Romania, Romania tours, spa cures, hotel accommodations and Constanta shore excursions. We will be always happy to assist you with your travel plans all over Romania.